New updates and improvements to the Buildable developer experience

Join us on Discord 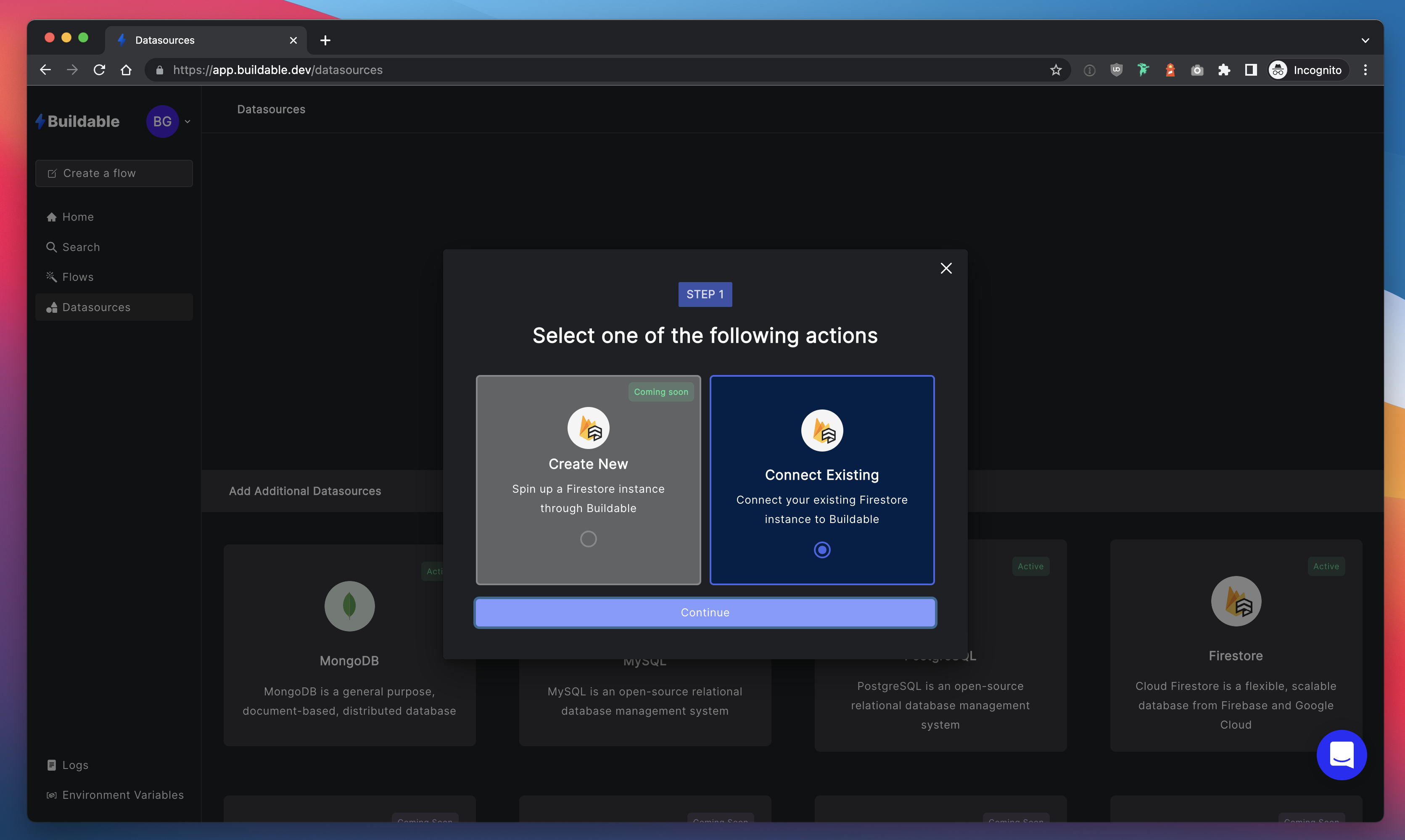 To connect a Firestore, simply:

1. Head to the Datasources tab of the dashboard
2. Select Firestore
3. Select the Connect Existing option
4. Securely enter your credentials and click Connect!

Just like with our other Datastore integrations, we also released code block templates to make it easy to build on top of your Firestore instances. This week, we've opened up 5 Firestore templates that let you easily and quickly manipulate data.

Slack is a workplace communication tool.

This week, we launched 50+ Slack templates that make it easy to build notification systems on top of your web apps, keep your team in the loop with important system updates and more.
‍
Check them out on Buildable's Github. 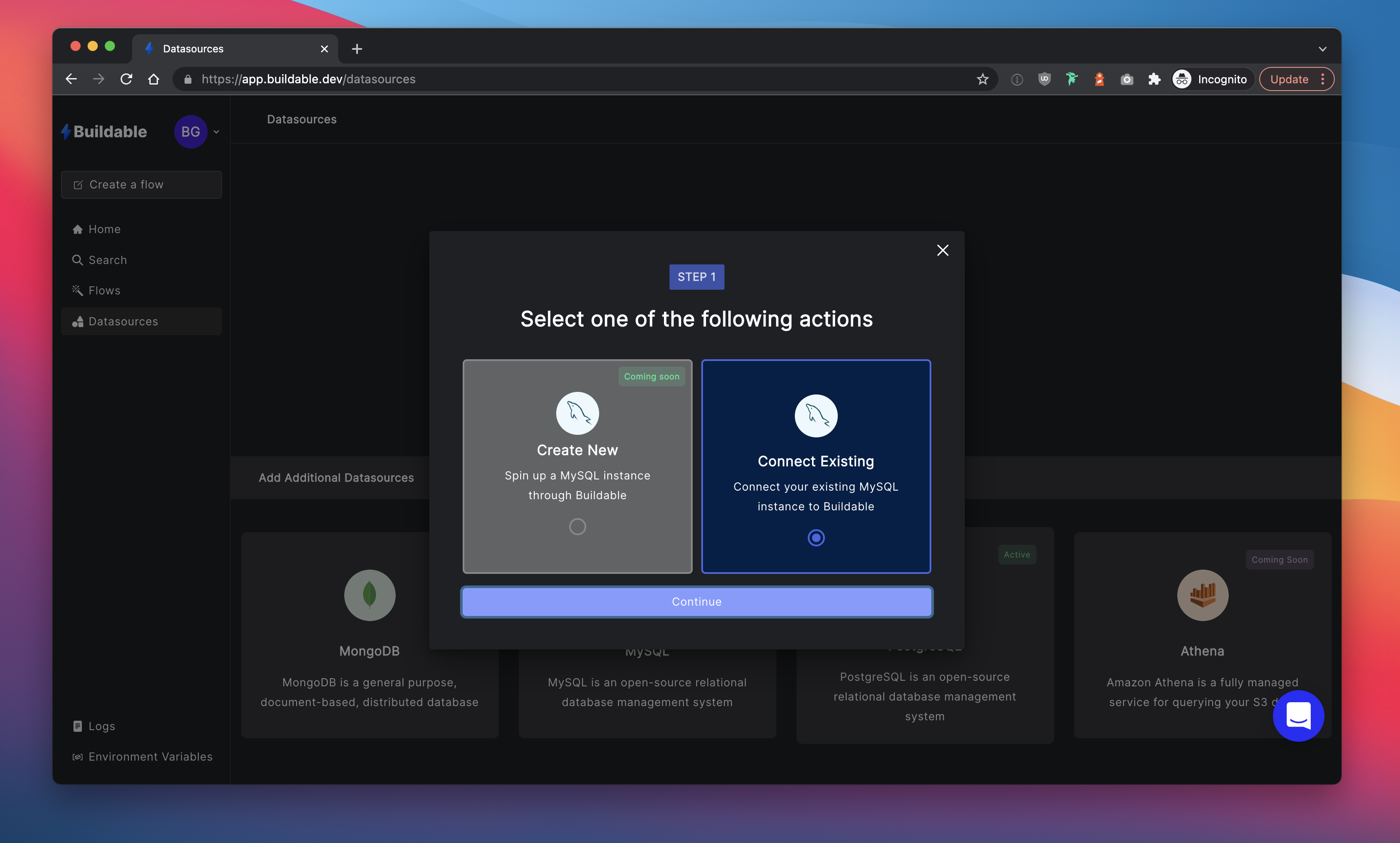 This week, we launched a formal MySQL integration that allows developers to connect existing MySQL clusters.

To connect a MySQL, simply:

1. Head to the Datasources tab of the dashboard
2. Select MySQL
3. Select the Connect Existing option
4. Securely enter your credentials and click Connect!

In the near future, we'll also be releasing the ability to create a net new MySQL instance (just like you can with our MongoDB option). Keep an eye on our changelog for news on that release.

This week, we launched 11 Supabase templates that make it easy to build on top of your PostgreSQL instances built in Supabase.

MySQL is an open-source relational database management system. Its name is a combination of "My", the name of co-founder Michael Widenius's daughter, and "SQL", the abbreviation for Structured Query Language.

Just like with our PostgreSQL and MongoDB drop, we also released code block templates to make it easy to build on top of your MySQL clusters. This week, we've opened up 7 MySQL templates that let you easily and quickly manipulate rows and also execute raw queries.

Tatum is a single, unified Javascript SDK, for over 40+ blockchain protocols.

This week, we launched 80+ Tatum templates that make it easy to build Web3 and integrate seamlessly with the blockchain of your choice.
‍
Check them out on Buildable's Github. 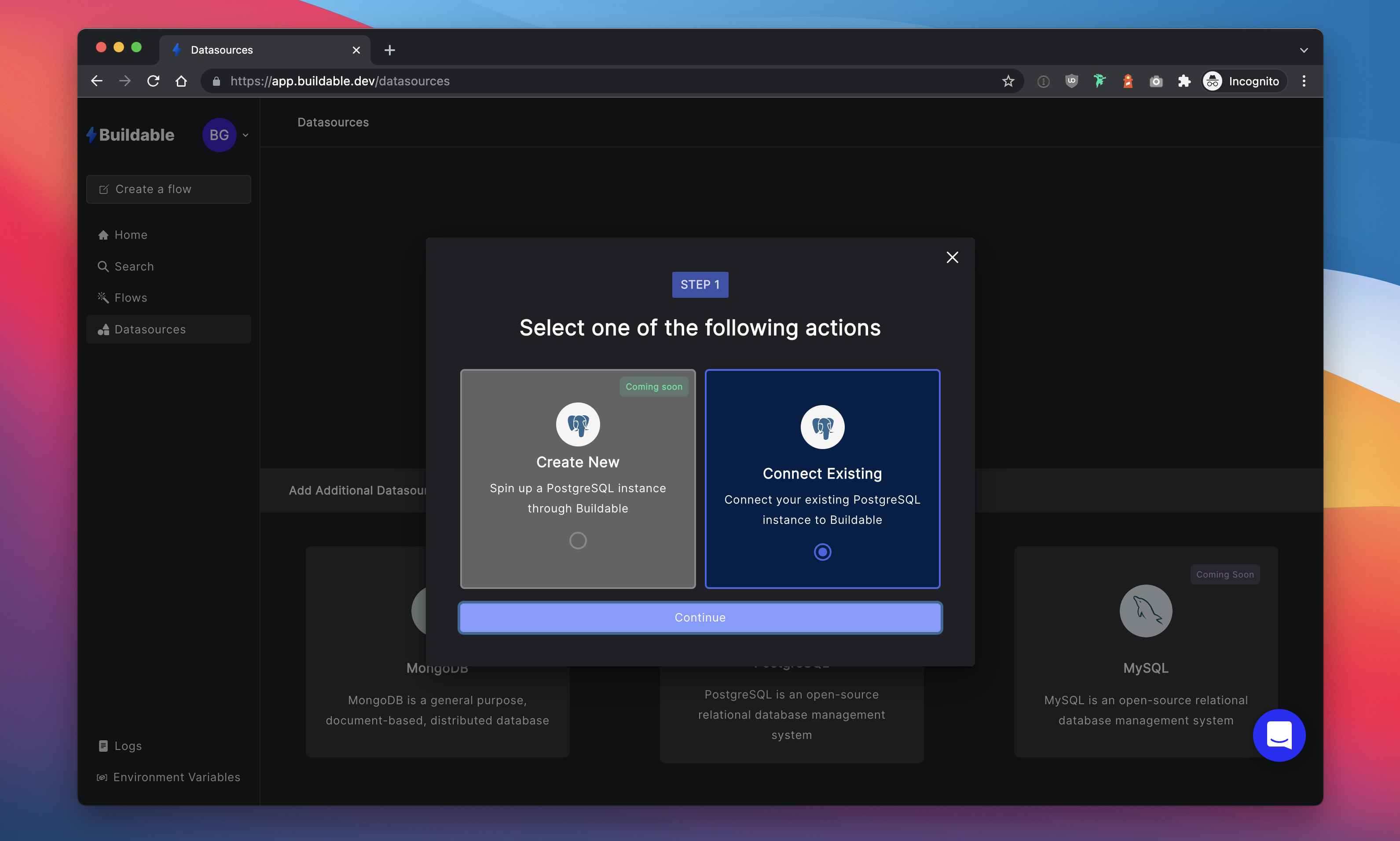 Since launching our Datasource product, we've always known that a PostgreSQL option was inevitable. In certain cases, a SQL database is the best option. Plus, PostgreSQL has been our most requested feature throughout January, February and March. This week, we're thrilled to announce we're fulfilling the demand, finally, with the formal launch of our PostgreSQL datasource option.

As of today, the ability to connect an existing PostgreSQL instance is shipped and ready to scale for all your data manipulation-based Flows.

To connect a PostgreSQL, simply:

1. Head to the Datasources tab of the dashboard
2. Select PostgreSQL
3. Select the Connect Existing option
4. Securely enter your credentials and click Connect!

In the near future, we'll also be releasing the ability to create a net new PostgreSQL instance (just like you can with our MongoDB option). Keep an eye on our changelog for news on that release.

Webflow is an in-browser design tool that gives you the power to design, build, and launch responsive websites visually.project management and note-taking app.

This week, we launched 7 Webflow templates that make it easy to build collections and manipulate items within your Webflow CMS. For all those familiar with CMS, you can understand the power of having these templates enable you to programatically create and adjust your collections.

PostgreSQL is a powerful, open source object-relational database system with over 30 years of active development that has earned it a strong reputation for reliability, feature robustness, and performance.

With every new Datasource option we release, we also provide code block templates to make it easy to use a connected datasource within your Flows. Naturally, with the release of PostgreSQL, we've paired a release of 7 PostgreSQL templates that let you easily and quickly manipulate rows and also execute raw queries.

Spotify is a digital streaming service that gives you access to millions of songs, podcasts and videos from all over the world.

With Spotify templates, you can access and connect millions of songs, playlists and podcasts to any of your web components or end-to-end applications. This one was an ode to all the creators and right-brained builders out there. We're pumped to see what the community does with this one...
‍
Check them out on Buildable's Github. 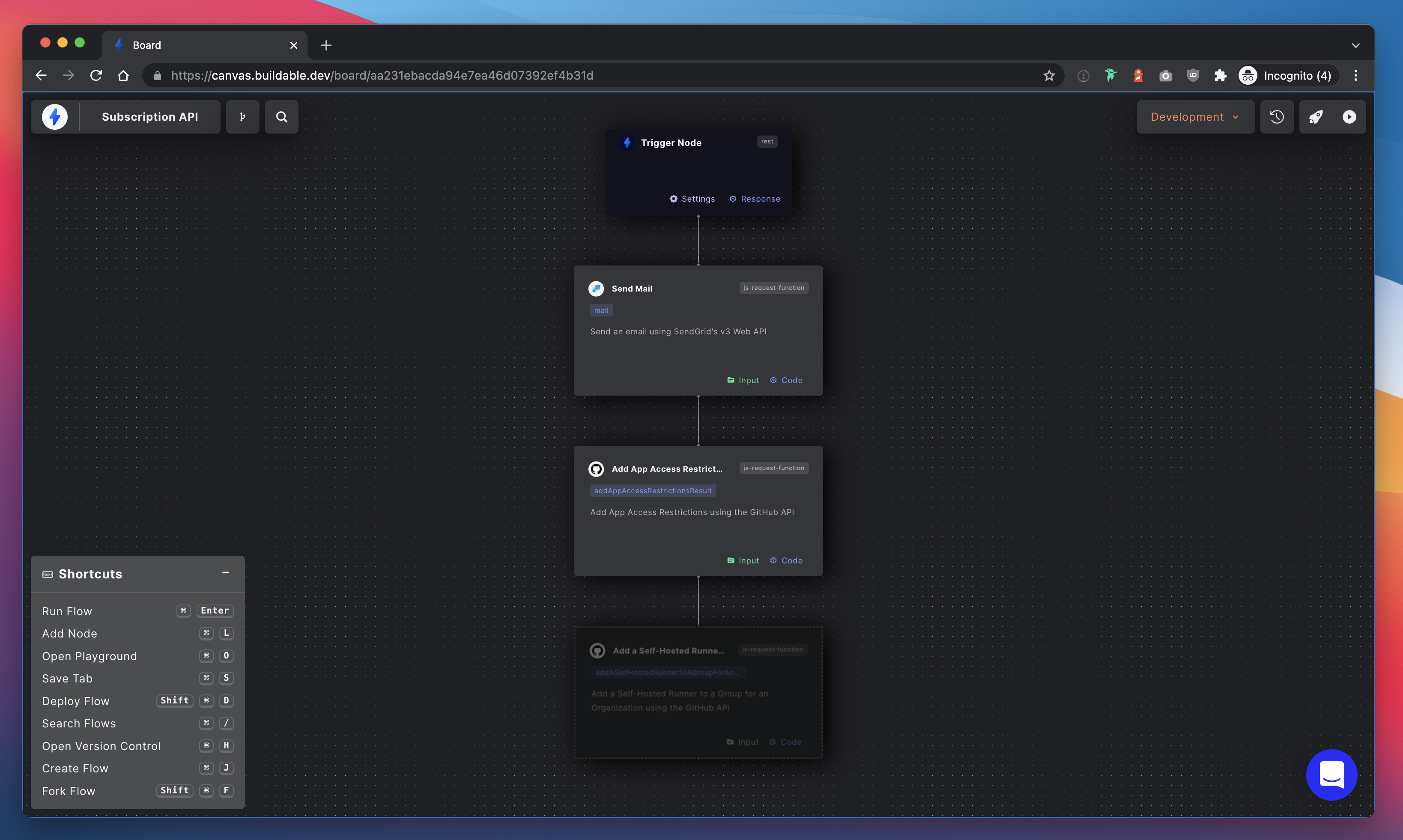 Our product team is incredibly focused on the core developer experience within the IDE. We pay extra attention to anything that relates to speed, which is why we felt shortcuts were a natural extension of the canvas. This week, we've launched the first 9 shortcuts available when building your Flows. Together, shortcuts bring down the time it takes to execute common actions to a mere collection of milliseconds. Give them a try with an existing Flow.

Buildable is commonly used by startups and scale-ups, but is primarily built and designed for the enterprise. To satisfy customer demand for dev teams that are using Buildable at scale, we've launched full logging capability. Logs, which contain the full call history of each Flow within your account, can easily be accessed via the new Logs tab in the dashboard. For developers on the Free plan, logs are stored for 3 days. This cap is extended to 30 days for developers on Buildable's Pro plan.

Notion is a beloved project management and note-taking app.

This week, we launched 18 Notion templates that make it easy to build apps on top of Notion and extend using its API. They're great for programmatically manipulating existing databases in your Notion organization, retrieving users, creating blocks in pages and more.

Check them out in the Notion folder on Buildable's Github.

We've heard in the past that a large portion of Shopify store owners, developers and agencies are looking to de-risk their operation by building more apps in-house (when appropriate). It's hard to predict when a certified tool on the App Store is going to be discontinued, dismantled or go out of business. It's also better if you have full flexibility over the core tools that manage the main operation of the Shopify store.

For that reason, it's more important to stores than ever to build their core user engagement logic in-house. When trying to do so, though, Shopify's API can be tricky to navigate and implement quickly. For that reason, Shopify's API was a great candidate for the next cohort of Templates within our open source project.

This week, we launched 15 Shopify templates that are great for getting started with Shopify development. Together with other available templates, like SendGrid and Twilio, agencies and store owners can build the crux of their engagement strategies in-house. These can be things like cart abandonment notifications via email, SMS order confirmations and more.

Check them out in the Shopify folder on Buildable's Github.

Airtable allows you to easily create a database that holds the information that matters for your work.

We just dropped 5 Airtable templates that make it super easy to extend Airtable in whatever way you want without being constrained by their native scripts. They're great for manipulating data within an existing Base and extending using other templates, such as Notion, SendGrid and Twilio.
‍
Check them out in the Airtable folder on Buildable's Github. 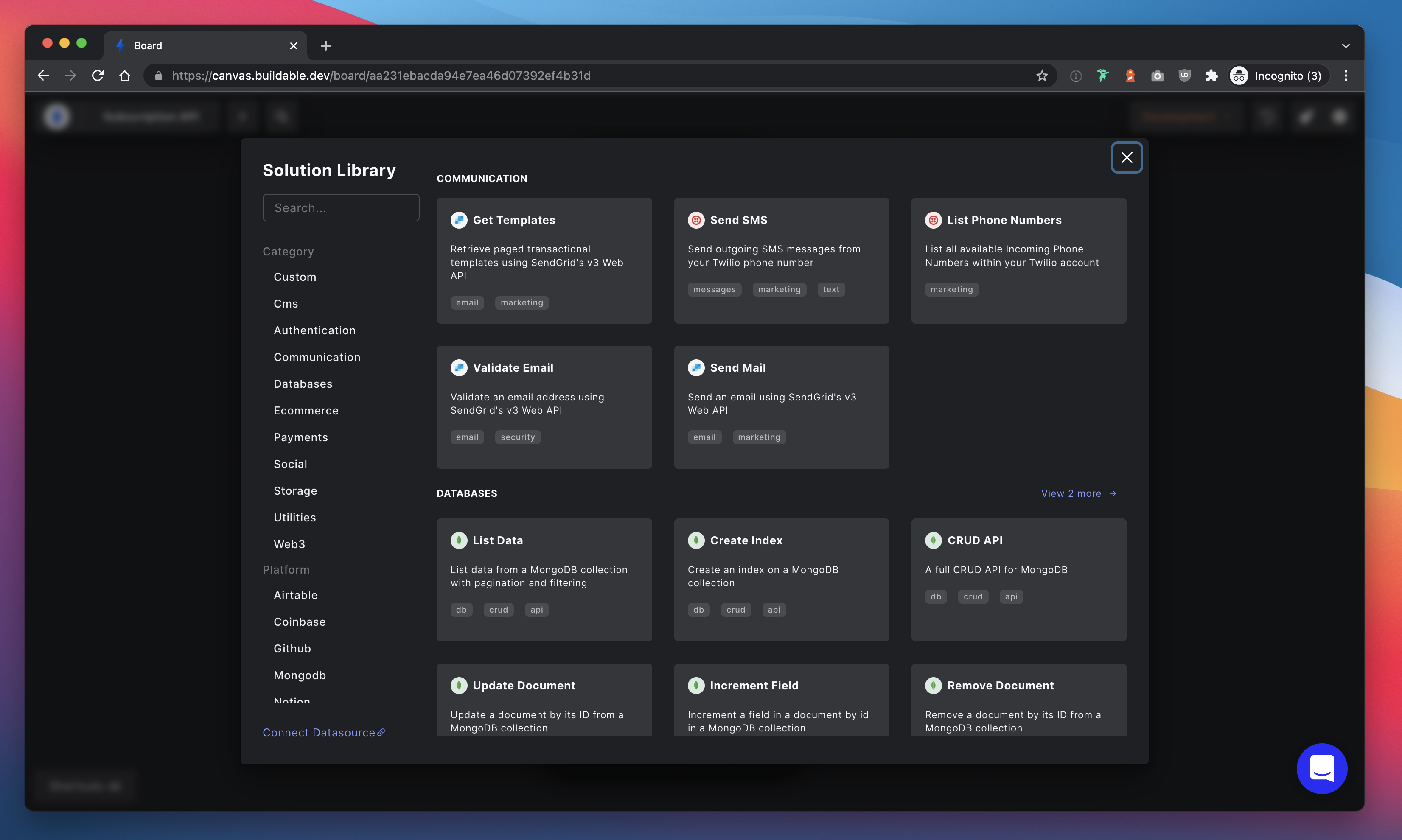 The world's top engineers waste 30% of their week parsing through API docs or re-provisioning DB clusters (i.e., the mundane stuff), which is terribly inefficient. To save developers hundreds of hours over the course of a month, we launched our first open source project on Github, called Templates.

Templates are enterprise-grade code blocks that work out-of-the-box with your Flows (i.e., instant endpoints). You'll love them because they synonymize how you interface with all your favourite third-party apps and databases, which makes it easier to build user-facing features and internal tools.

In other words, the process of integrating Stripe actions looks and feels the same as integrating Supabase, Ethereum or Airtable actions. This means that you'll no longer need to individually dig into every single third-party app's documentation when building your features. Simply create a Flow, add the Template, customize your logic and deploy!
‍
Most importantly, Templates are completely free under the MIT license and available on Buildable's Github.

We've heard that the main frustration developers have with a lot of other low-code tools on the market is the lack of version control or historical record of development. It's not easy to see what other team members have done and/or revert back to previous versions. We're deeply dedicated to building the best developer experience, so we worked hard to build an intuitive and super fluid history directly into the canvas.

When building your Flows, simply click the Version Control icon at the top of the canvas. Once clicked, it will open a drawer from the left side of the canvas that contains a full history of your work along with timestamped versions of your Flow. You can click on a list item to view a previous version of your Flow. You can also use the revert button (found when hovering on a version item) and toggle to a previous version to view the Flow version at that point in time.

Stripe is a suite of payment APIs that powers commerce for online businesses of all sizes.

Our launch cohort of templates had to include one of the most popular payment rails on the planet. We've dropped 21 Stripe templates that make it easy to manipulate customer data, attach payment methods and transact. You can build a full subscription app with these templates, then layer in additional functionality using other templates, like Twilio, Airtable and Notion.

Check them out within the Stripe folder on Buildable's Github.

SendGrid is the most developer friendly email delivery network responsible for over 1B emails delivered per year.

Email triggers and notifications are one of the most app-agnostic features out there. We wanted to make it as easy as possible to understand SendGrid's delivery network and most useful APIs, like the Send Email and Validate Email Address actions. These are pivotal functions of SendGrid that almost every developer would benefit from understanding and implementing.

Good news is Buildable's SendGrid Templates make it a breeze to implement. Check them out within the SendGrid folder on Buildable's Github. 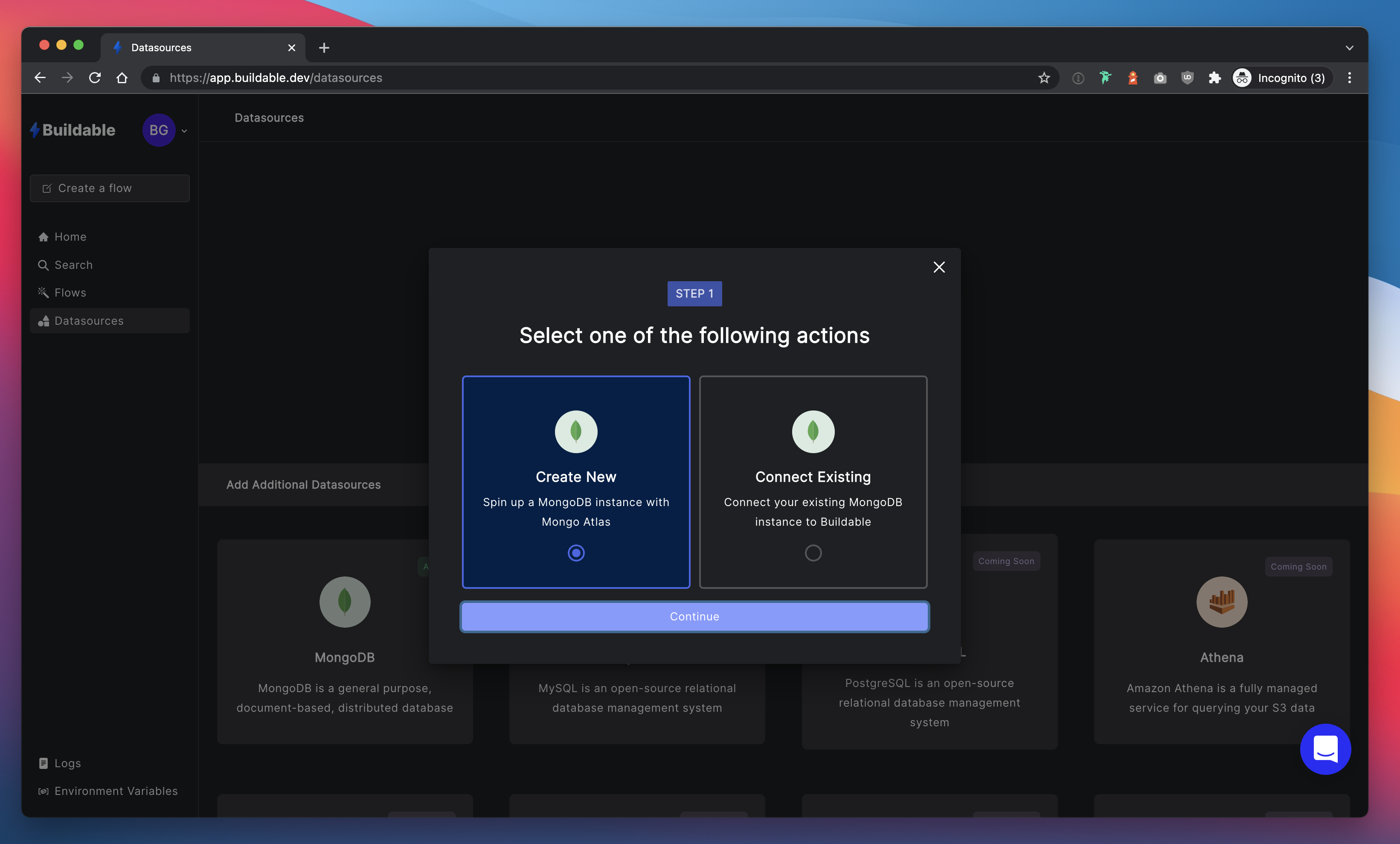 Provisioning databases is a headache that every developer shouldn't have to deal with. To take this burden off of our community's shoulders, we partnered with MongoDB to release a one-click spin up option for a development MongoDB cluster using Atlas.

As of today, a Create New option is now available for all Buildable Plans, including Free, which lets developers provision a database cluster in a few clicks. Once the process is initiated from a developer's dashboard, provisioning of the cluster takes approximately 5-10 minutes. Once complete, we'll automatically create an Environment Variable using the cluster's connection key, which means it'll be ready to be used within a Node in your Flow right away!