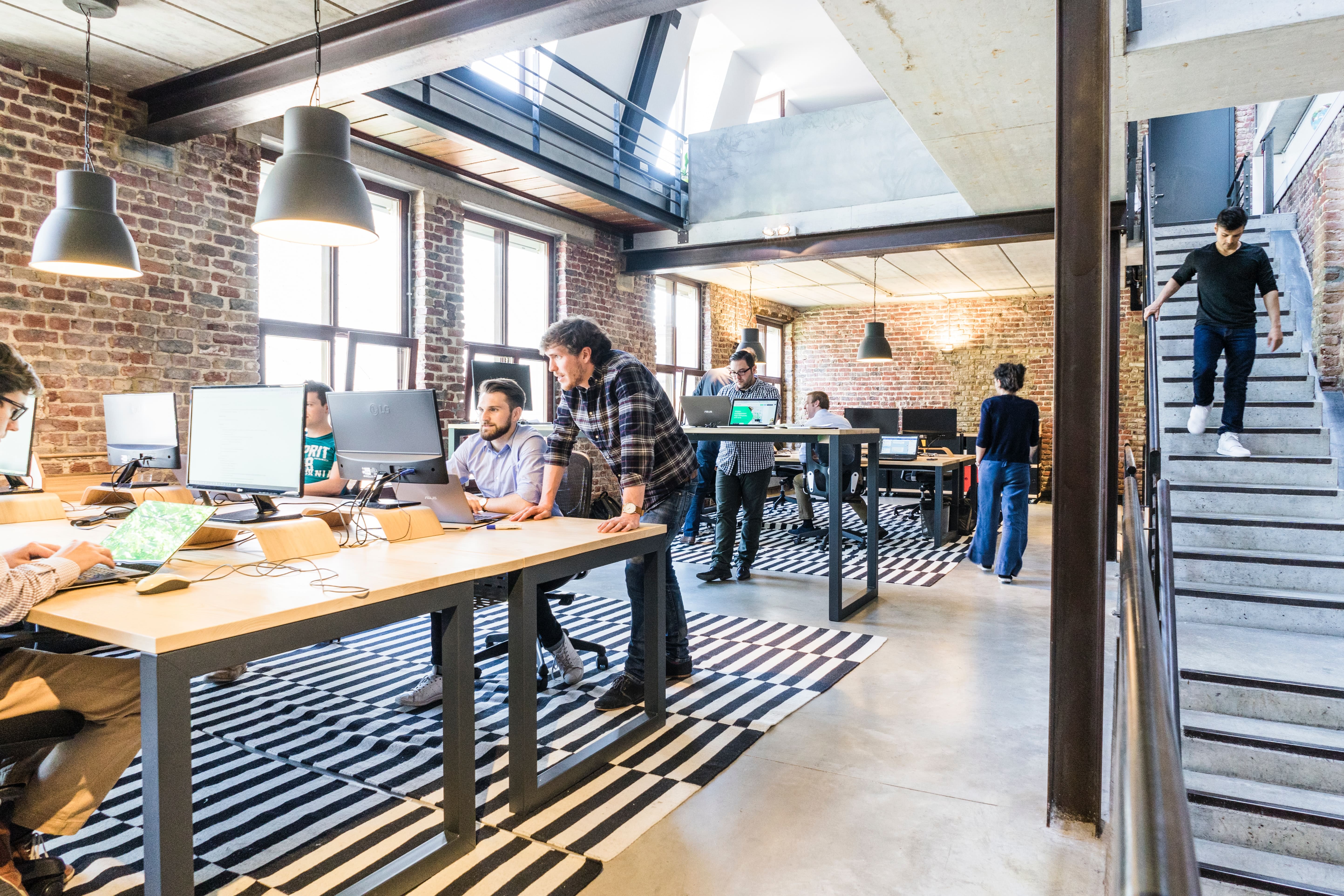 Buildable's history as an organization is rooted in big enterprise system building. Our story follows the same pattern and "pivot" as MailChimp did back in the early 2000's, whereas the first revenue Buildable ever generated was as a service-based enterprise software agency back in 2017. As a small team (5-people jammed in a 3-person office in one of the first WeWork locations in Toronto + an awesome global team of 6+ additional engineers abroad), we were able to convince a number of scale ups and Fortune 500 organizations to let us lead their new product development for both web and mobile. How? We're still unsure.

As practitioners, we were obsessed with the whole software lifecycle and product design process. We wanted to handle it all because we felt this was the best way to learn how best to ship world-class products - from idea to deployment to scale - and, boy, were we right.

Scaling to 7-figure revenue in 18 months

As a new company, we focused really hard on hiring smart people with good values and working hard. Through this simple, yet under appreciated, one-two punch, we were able to set the foundation of a fast-moving company and secured a number of super exciting, industry-agnostic projects. Some of the early applications we led included:

The projects we led included the full suite of product development services. Before we wrote a line of code, our team was first tasked with product design. We immediately flocked to Figma and became experts with their design tools. The greatest product teams first think about the psychology behind the technology before they think about the engineering. We spent a ton of time in design optimization meetings, trying to figure out our perception of UX/UI best practice. However, we also thought intensely about the more subtle challenges of building great products, such as the design to engineering handoff and the frontend component system in development. It was evident with each build that the software lifecycle status quo had fundamental constraints that you couldn't work around, but instead simply had to account for and deal with.

Despite the constraints, we were able to deploy incredibly rewarding applications (no pun intended), which ended up being the foundation of a number of great businesses we were and still are proud to work with on a daily basis.

As we scaled our business as a small, but mighty, team over the first 18 months, we grew revenue to a 7-figure top line. A huge success, especially for a first-time founder leadership team. Despite the wins, however, we  started to feel a tremendous amount of growing pains. We not only realized, first-hand, how tremendously complex the software lifecycle was and how immovable its constraints were, we became painfully familiar with the economics behind it all.

Building a world-class web or mobile application required a country-sized army, which meant we had to charge our client partners as such. Our services were expensive, which meant a lot of great companies decided not to execute a build because it was out of budget. We needed top tier product designers, product managers, project managers, backend engineers, frontend engineers and devops engineers. Each trade, in its own right, was specialized, which meant that salaries were high, especially in a market like Toronto. Our office offshore was also facing competitive salary pressure from the massive investment by multinational firms setting down roots in the same region. We knew software was becoming even more inaccessible to many, which was stifling innovation, and this was primarily because of labour prices and development times (i.e., expensive labour * high volume of hours required to build software = software app price). We couldn't help but think about how many amazing tools didn't make it to market simply because it was too expensive to build. We spent countless hours in conference rooms at our first WeWork building discussing how much of a disservice this was to our fellow business owners, our industries and our economy.

To us, it was clear. The world needed a new model to help facilitate the creation of great software products. It was clear then, which was pre-pandemic. Now, it's more palpable than ever.

Investing in a net new model

Back in 2018, we felt strongly that innovation in software development wasn't going to come from innovating on the existing model. We tried that and came to the conclusion that the constraints were too taxing. Instead, innovation was going to require a net new model entirely, so we decided to invest our profits instead of pocketing them.

We equated the shift in size and proportion to the same shift the world had just seen from taxis to ride sharing. The unfavourable rider economics that forced everyone to stare at the meter their entire ride and experience the friction of paying with cash and splitting bills meant the Uber model wasn't just desired, it was demanded. Almost required. Innovation wasn't going to come from cab companies. They were complacent and comfortable with their medallion-protected revenue - it needed to be a new vendor that was mobile first and a logistics powerhouse.

Similar for software development as a service, we fundamentally believed that the switch to more accessible software-based innovation wasn't going to come from a more efficient agency, like how we were operating. It was going to come from a new platform based vendor that was a backend and devops powerhouse. We, therefore, decided to double-down on our bet and make the switch from agency to platform.

During the first few days of research, it was also clear that a lot of extremely talented, well-funded companies have tried to solve this problem already - and failed. They either couldn't scale the model or were building too similar of products, like those that were taking the communization route. We wanted to create a platform, specifically for developers, in which would allow to exponentially increase their efficiency without requiring them to learn new languages or systems. If Tony Stark with the Ironman suit was a superhero with superpowers, we wanted to make the Ironman suit of developer tools and give every engineer on the planet superpowers. It had never been done well before, so we set out to try it for ourselves.

The premise was simple. We wanted to release a platform that let developers write, test and deploy code exponentially faster than they could traditionally. We wanted it to feel familiar, while providing a slew of native features that reduced the expensive complexities we solved as an agency for big companies. We also wanted to wrap it up into a platform that would make it affordable at scale.

Most importantly, we emphasized power of reusability. If one problem was solved in Buildable by a developer, like search indexing or user authentication, then it would be solved for all developers in Buildable. It needed to be a self-perpetuating ecosystem that became more valuable to our users the more it grew.

Over the course of 2018 and 2019, we worked tirelessly with our existing enterprise customers, large and small, to create the first beta version of the Buildable platform. We had to first work through the lesser fun stuff, like defining the product suite, new pricing models and IP implications. Surprisingly, the latter two items were easy. It was identifying the pieces of the software lifecycle that could actually be automated or systemized that was the difficult part.

We knew, for sure, that microservice best practice was going to be at the forefront of the platform. We had been working with Kubernetes for years and understood deeply how the difference between a scaleable application and a bug-ridden one was the quality of its architecture and how much it distanced itself from being a monolith. Microservice meshes were so critical, and yet they were so difficult to execute properly, so we decided to build a feature to help facilitate microservice best practice. The feature, fittingly and literally named Services, would be capable of creating a microservice data resource in a matter of seconds with full CRUD operations out-of-the-box.

Once we had that, we needed an interface to be able to manipulate data from microservices and create/enhance bug-free application logic that was a breeze to deploy. We called the interface an editor and called the visual endpoints that were created in the editor "Recipes".

Finally, we created a mechanism to create and share logic templates. An industry-first mechanism that would allow any developer to share a URL, which housed production-ready code that could deploy and scale out-of-the-box. Login with Google quickly became a popular Recipe Template.

Continuing to scale over the next 3 years

Moving forward, the sky is the limit with the power and potential of the Buildable platform. Our new industry now even has a name, which has been on the tips of every VCs tongues for the past 6 months - low-code/no-code (LCNC). When we started building the platform, we had no idea this much attention would be put towards the ideas that we started compiling years ago. The good news is our earliest curiosities gave us the benefit of a significant head start in a very lucrative race.

As a team, we're simply excited to be at the forefront of innovation. We've even already seen Buildable be used in such incredible ways. For example, Mayor John Tory and the City of Toronto launched a powerful crowdfunding platform Distantly.ca, powered by Buildable, at the onset of the COVID. The Distantly.ca platform was ideated and deployed in 14-days days and provided immediate financial assistance to SMBs across the country. Within 90 days of Mayor Tory's public launch announcement, over $70,000 was quickly and securely transferred to business owner bank accounts across the country to help fund payroll, rent and other obligations. This was our exact vision, realized. Our city and our community benefited from having access to more cost efficient and speedier software development. Now, it's time to scale the vision.

In the future, we're simply excited to see how the world's most innovative technologists can add to our economy with better software products, all without the need of an agency. Which new business models will be reinvented by builders on the platform without our input? We're, again, pleasantly unsure, but we're excited to find out.

3. Investing in a net new model